The Story Of Boto And Mary 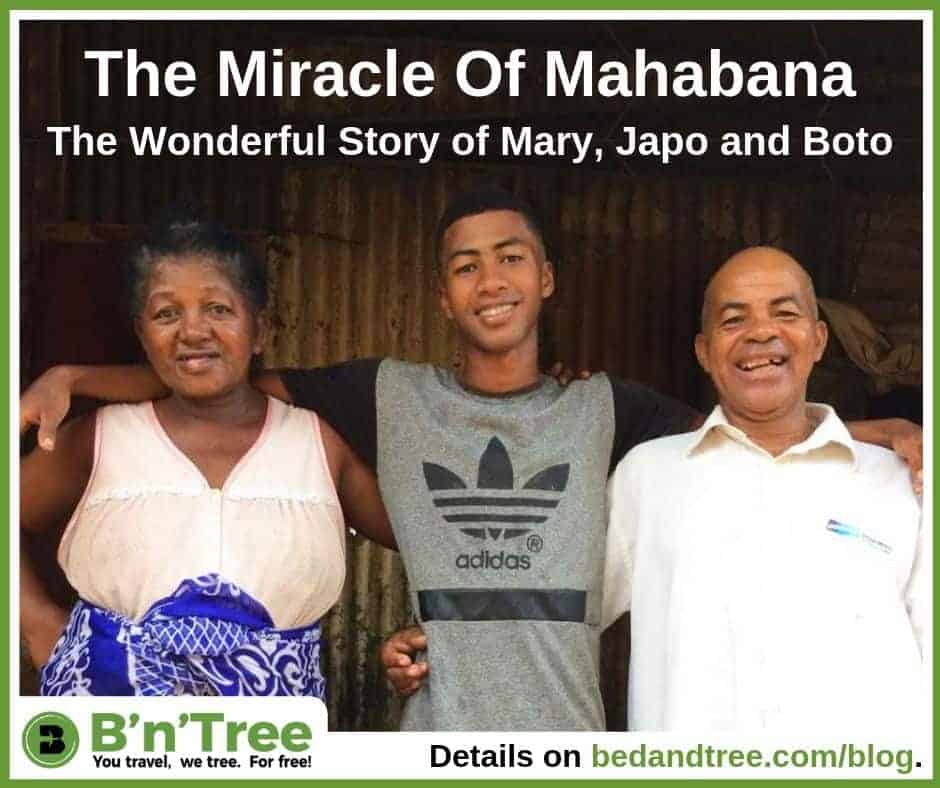 Today, Boto and Mary (Maman’i Rasendra) are a happy couple serving drinks in their newly opened coffee shop. Palm trees sigh outside; the soft sea breeze rustles leaves and birds compete with calls of curtsy. Yesterday’s coconuts form a pile in the garden and will soon be turned to compost. The air is moist.

Inside, cups and cutlery clatter and friends catch up on gossip. The sun shines through open windows, the scent of freshly roasted coffee fills the room and a proud owner dashes around to serve his numerous clients.

The shop is already a favorite hangout in the small town of Mahabana on Madagascar’s enormous coastline. Boto and Mary’s new lifestyle is reassuringly safe, environmentally conscious and, most important of all, setting an example for others.

Ask them if any of this was possible just a few years ago and you’d have been laughed out of the coffee shop – one which didn’t even exist at the time. Boto smiles, “even in my wildest dreams, I couldn’t have imagined this…”.

Their youngest child, Japo, is currently attending university and studying Environmental Studies. When Boto talks about his son, his eyes light up. He calls himself “the proudest dad in town”.

Their success story is remarkable and, unfortunately, used to be a rare one. Not anymore.

Turn The Clock Back

A few years ago it was a very different situation. Boto and Mary are effectively debt slaves. They work hard and scrape together every penny they can but they’re still struggling to get by. It’s a vicious cycle of poverty and one which, sadly, many find impossible to escape.

Boto and Mary live a meagre existence in Mahabana, a small fishing village on Madagascar’s West Coast. A village that would eventually suffer the same fate as other coastal towns nearby.

A lack of environmental education and scarce regard for conservation would lead to dangerously overfished seas. The local marine population, dwindling as a result, had shrunk rapidly and could no longer support the community. It couldn’t support itself.

The sea had been the prime source of income for the majority of the village’s workers, and now it was gone. The devastating loss of fish nurseries was acknowledged by residents, but they couldn’t have known the far-reaching impact it would eventually have.

Boto and Mary, desperately attempting to support their family, still spent their days fishing. They had little idea that the continuing deforestation all around them was the main reason that fish were disappearing. Their limited daily catch soon became a concern.

The only other viable option was to harvest salt from the nearby salt flats and sell that instead. This, however, came with its own problems, namely that there was neither infrastructure nor organized transport to and from the salt flats. Without their own transport they struggled to get there.

Remarkably, they managed to construct a homemade canoe from the scraps they could find around them. “Our only blanket was the sail!” Mary laughs. Today they joke about it but at the time, the risks of travel in a homemade canoe far outweighed the benefits.

With local resources extremely limited and their main source of food (rice) hard to come by, more and more meals were being skipped. Nothing would stretch far enough and the children were hungry every night.

The days were bleak, opportunities were non-existent and their health began to deteriorate. Sleepless nights were spent worrying about school fees, food and limited work – the thought of medical care was barely considered.

What other option did they have? Finally accepting that fishing and salt-harvesting could not support his family and wishing to support them as best as he could, Boto was forced to the last resort: chopping down Mangrove trees. “It broke my heart…even at that time I knew it was wrong, but we had to eat. I had no choice.” This time, nobody’s laughing.

Along with many others desperate for any source of income, Boto spent his days inadvertently destroying another precious local ecosystem. The lumber was sold and he was paid a pittance, barely enough to cover the family’s daily costs. He was quite literally paid pennies for the brutal, backbreaking work. He was often required to carry a full tree on his back and shoulders, a heavy burden which, over time, would further ruin his well-being.

Japo was still a young boy and living at home. He wanted to go to school but even with all the willing in the world, the cost of education wasn’t considered: food came first.

Boto and Mary were not alone. Many families found themselves in the same situation and were struggling to make ends meet. Who knows how long this uncertain pattern would have continued without the introduction of reforestation projects? How many precious habitats would have been destroyed?

When Alissa and Jamie Shattenberg (International Director for Madagascar) arrived in 2007 with new ideas for reforesting Madagascar, they were met with skepticism.

But their vision would go on to transform the community forever.

They began their work with a clear and fresh attitude: not only would they provide new opportunities that would save the village, they would also bring education, sustainability and hope for the future. Their work in Mahabana brought positive change, but they had to start on a small scale.

Boto and Mary were some of the first people in the community to welcome the new ideas about reforesting Madagascar and their faith would be rewarded.

“I can still remember the moment I was told” says Mary. “I was at home, cooking. Waiting for Boto to return from work. I saw Jamie and Alissa walking toward our home and couldn’t believe my eyes – we don’t get many visitors in Mahabana. They wanted to come inside to ‘talk about an opportunity’. You should have seen me, I was so nervous! And the hut was such a mess! I was trying to make tea, tidy the chairs, sweep the floor…for the first time in years I burnt the rice!”, she howls.

“They explained their vision to reforest our community” says Mary. A small group of 8 workers were hired in Mahabana with the new title of ‘tree planters’. Boto and Mary were among them.

After so much time in the doldrums, daily life for the family began to change. Boto had the honor of planting the first mangrove propagules. Perhaps one of the biggest successes of the project was converting the work of those who used to destroy natural habitats. Instead of removing trees and selling the timber, Boto was now planting them and creating a future.

100,000 mangroves were planted by these 8 employees in the first year alone. No longer were they punishing their bodies with excessive weights and excruciatingly long days. For the first time in their working lives, the tree planters were receiving a fair and consistent income. They, along with the entire community, quickly began to see the benefits of reforesting their home. Naturally, there were plenty of other villagers keen to get in on the act and news spread fast.

As the success of the project became clear, more funding was received and more workers were required. More people from the village of Mahabana were hired and the extra benefit was that less people were working in deforestation.

The villagers worked hard to restore the land and today have a strong sense of pride and ownership over their new trees. Since fewer workers are now dependent on the sea for an income, previously endangered marine life has also had a chance to recover.

Life in the Madagascan village has changed dramatically. The quality of life has improved exponentially not just for Boto and Mary’s family, but for the whole community. Family relationships and local bonds have been strengthened.

Around 82 million trees have now been planted and many employees in Mahabana have even been able to purchase land in the city. Not only are they able to take more control of their community, they also now have extra powers regarding local conservation. As a result of consistent and stable incomes they are able to eat well, afford medication and purchase clothing and other luxury items like mattresses.

Furthermore, it has even been possible to construct a brand-new school in the village and families can now afford to provide their children with an education. What was once a vicious cycle of poverty is now a pattern of education, sustainability and environmental awareness for the future.

Boto and Mary take orders for coffees, catch up with friends and enjoy what life can offer. No longer debt slaves, they are now key team leaders in Mahabana. They have what they need to care for their family and community, and have saved enough money to help others who are in need.

Japo was finally able to get an education and committedly learns Environmental Studies. He is returning home from university this weekend for a semester break. After seeing first-hand the impact that the Madagascar reforestation project had on his life, Japo hopes to continue in his mother and father’s footsteps creating positive change.

“It’ll be great to have him back” acknowledges Boto. Mary chimes in: “And he can help you spread all that compost!”

Boto nods, his smile beams and he refills his coffee mug. A few years back they were struggling to survive; now his youngest son is a well-dressed and well-educated student. All of this because some good-natured people paid him to plant trees.

He sips his coffee and thinks of Japo. His chest swells another few inches when thinking of his son. Boto clearly is the proudest dad in town.

Related: The 4-Win Formula: How Everyone Benefits from a Partnership with Click A Tree

Stories like the Miracle of Mahabana were incredibly rare – hence the name. But the tide is changing and the future is bright. Miracles do happen, and you can help create them.

Planting trees isn’t rocket science and you can help make a difference without it cosingt you a single cent! Find out how you can plant trees for free, sign up to our newsletter to plant your first free tree and make sure to begin all your travel bookings on clickatree.com.

And, of course, don’t forget to share B’n’Tree with your family, friends and co-workers. Every tree counts!

Do you have any further ideas on how to make miracles happen? What are your thoughts on the miracle of Mahabana? Join our Facebook discussion on The Miracle Of Mahabana – The Story Of Boto And Mary.

Never miss any good news. Sign up for our newsletter GROW today!