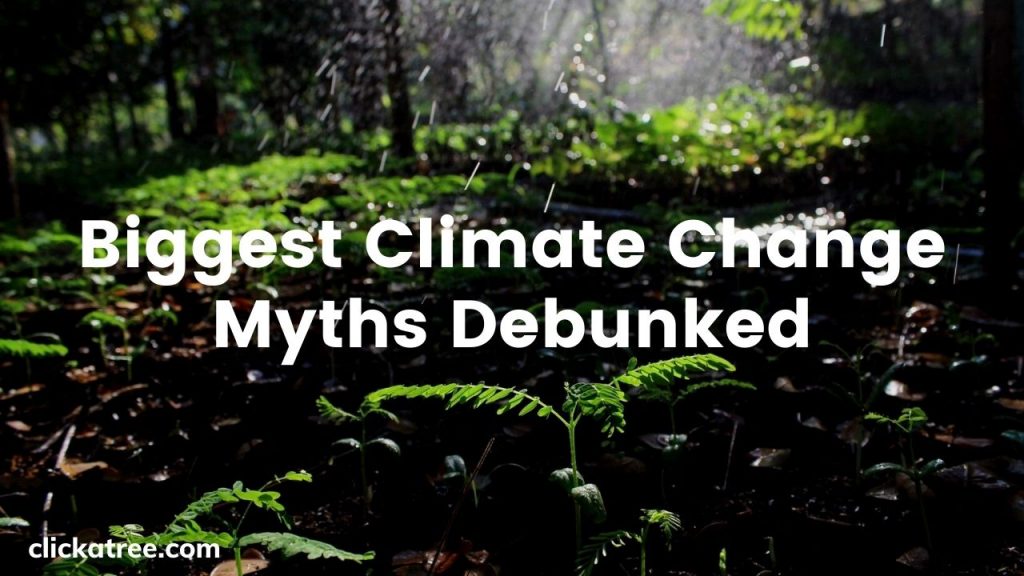 Climate change can be a touchy issue. With all the misinformation we thought you’d like to hear the cold, hot truth about common climate myths. Are we really responsible for climate change? Has the Earth always been this hot, or is it just me?

We won’t keep you any longer from the truth. Let’s debunk these climate change myths. 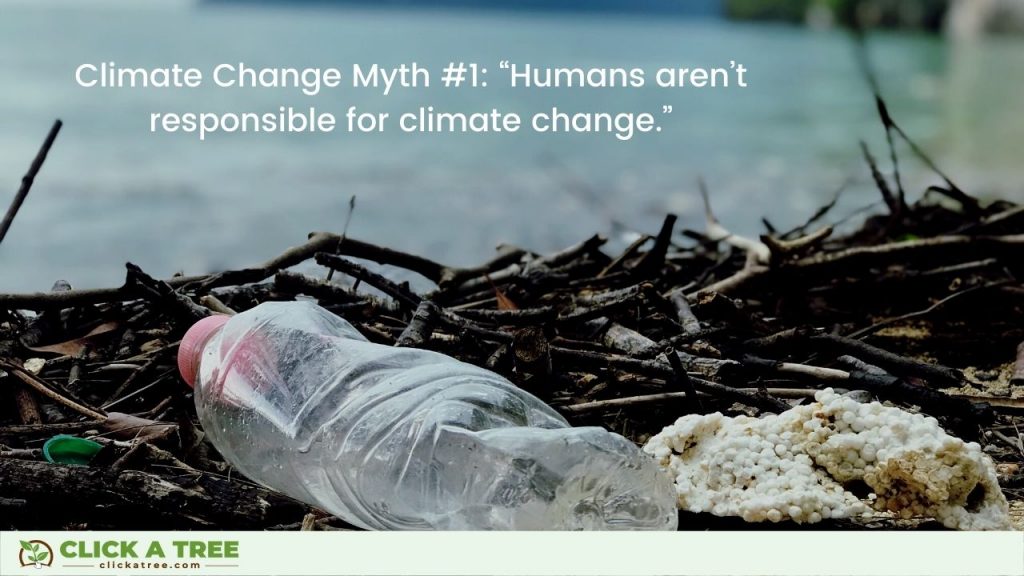 As morbid as it is, we can only point the finger at ourselves. Science has proven time and time again that the rates of greenhouse gasses have risen substantially in the past 30 years, and the 1-degree Celsius temperature average is man-made.

We simultaneously cut down our carbon sinks (forests) and replace them with greenhouse gas agents (agriculture and industry). Humans omit a few different harmful heat-trapping gasses into our atmosphere such as CO2, Methane, Nitrous Oxide, and Chlorofluorocarbons. 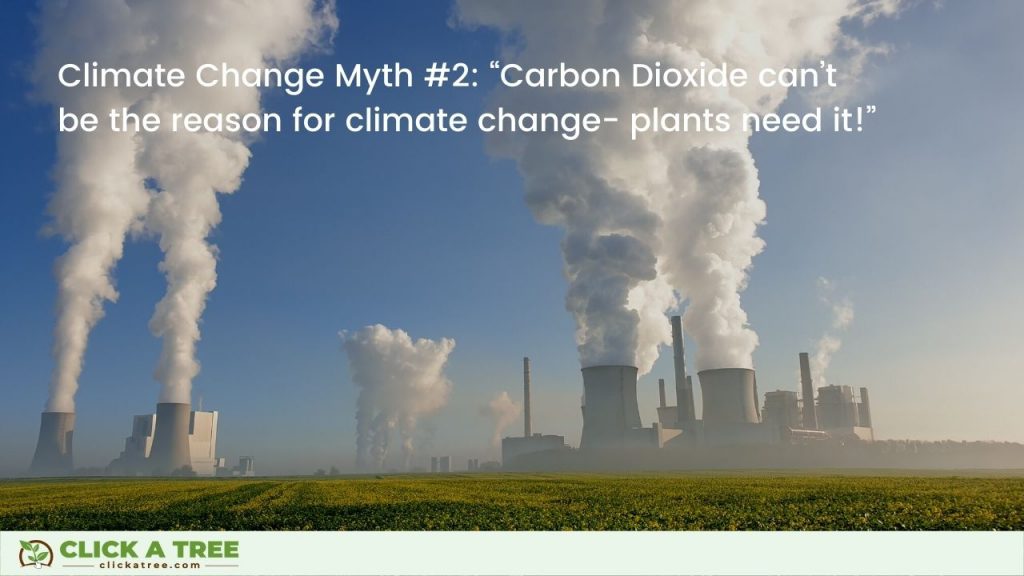 Trees are like our cool aunt; but, if you give the cool aunt too much to drink, she passes out, same with plants. To put it simply, forests can no longer absorb the record-breaking amount of carbon dioxide we release each day.

The last time the carbon ppm was this high, dinosaurs walked the Earth! Sounds crazy, right? Yep, the carbon dioxide parts per million haven’t been this outstanding for over 800,000 years. 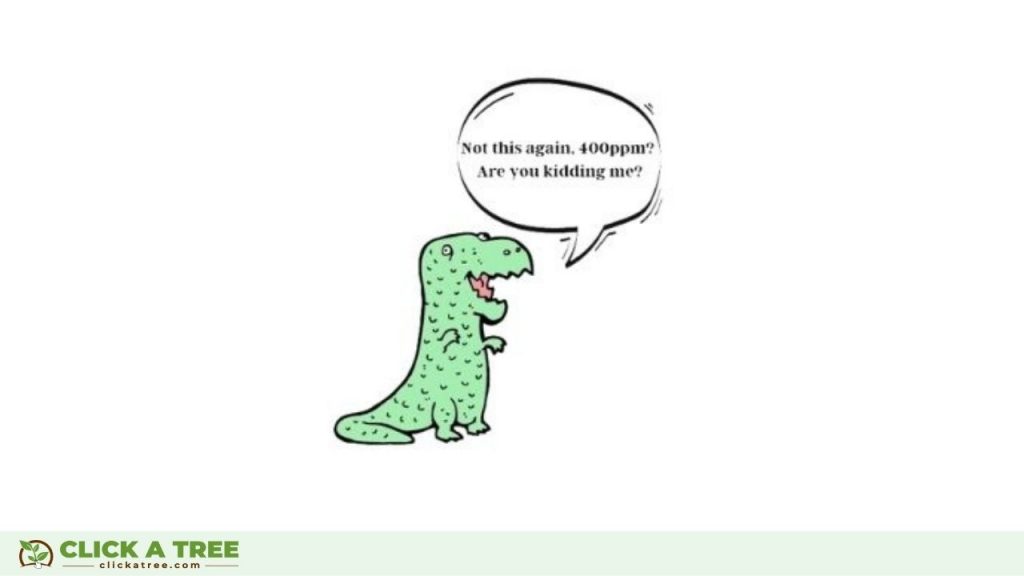 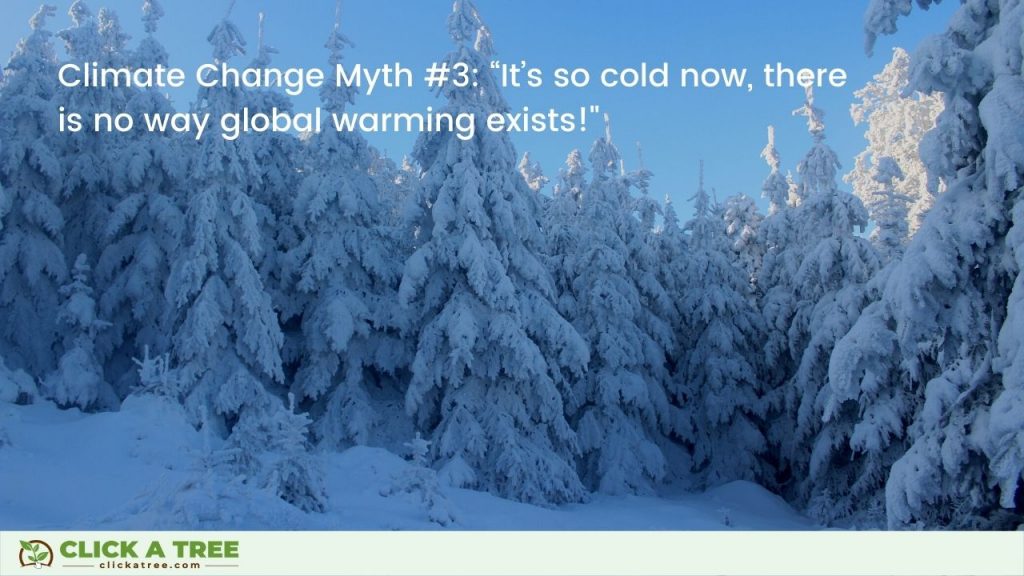 Weather is short-term, the climate is long-term. Climate is observed over decades, weather attempts to be predicted per week, hour by hour, second by second.

Know somebody that will enjoy this article and also learn a thing or two? Share it with them:

Climate Change Myth #4: “The Earth’s climate has always been in a state of change.” 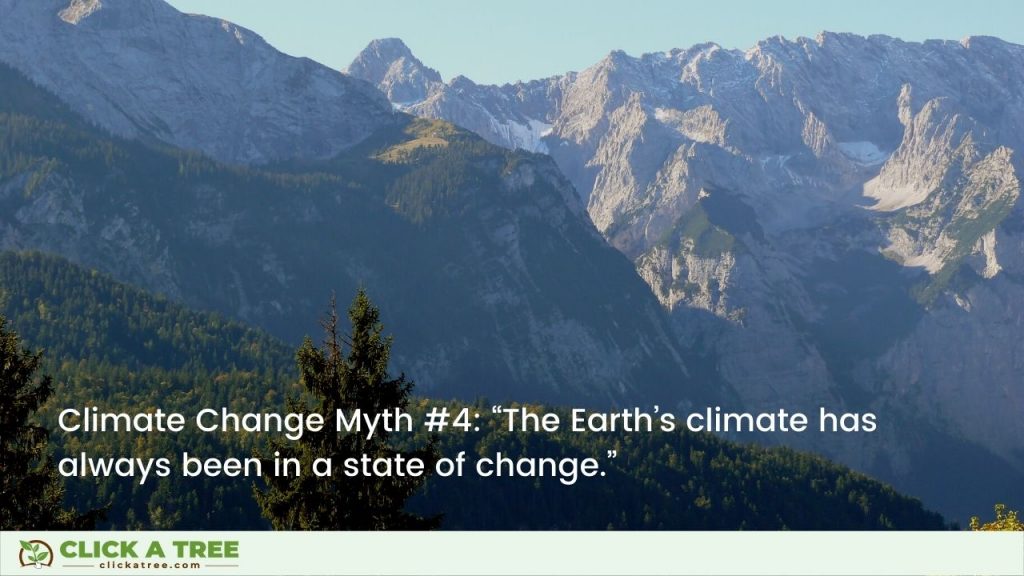 This is the most realistic myth, but alas, still a myth. Although it may be true that the Earth has always experienced a state of constant change, the changes occurring in the present day are speeding up in their natural cycles.

As opposed to taking hundreds and thousands of years in the heating and cooling processes, these temperature switches are happening now in mere decades.

“When I was a kid, we had snow in winter!” Exactly grandma, exacttttly! The rate of temperature rise is 10x faster than the rate studied from the mass extinction, occurring over 56 million years ago, causing an alarming wipeout of over 70% of land species and upwards of 90% of marine life.

Climate Change Myth #5: “We have time to fix this problem in the future.” 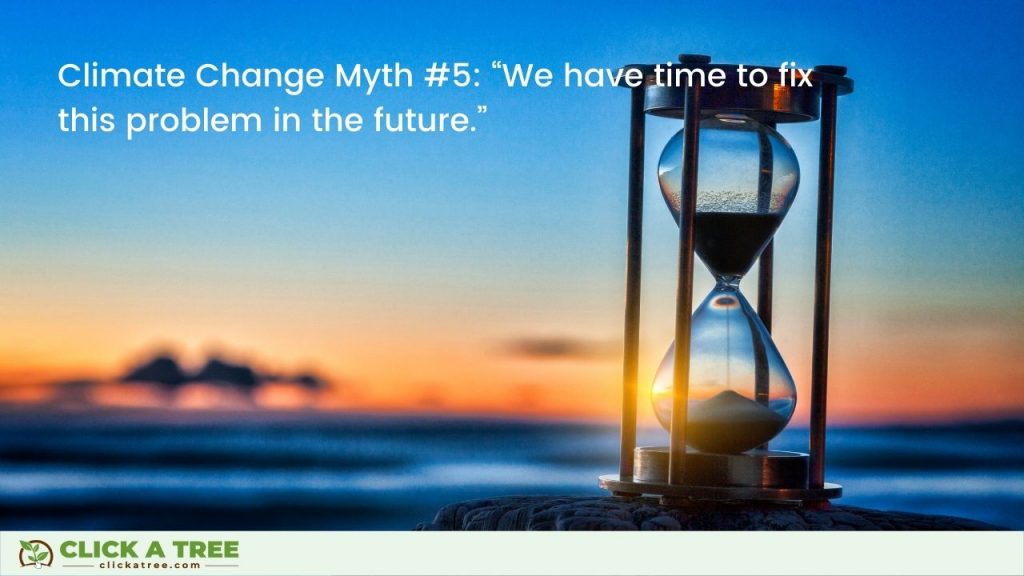 Thinking we have time is a slippery slope argument. Currently, we can see the effects of climate change by looking at global temperature increases, rising ocean levels, and temperature, ice sheet melt, advanced snowmelt, increase in extreme weather storms, and sea-level rise.

The evidence stands before us now, as the current cycle continues. A majority of scientists claim that if no big changes are made by 2030, the damage to our planet will be irreversible.

A good way to get involved is to back countries in their efforts for sustainable business practices. The UN issued a list of 17 SDGs, or “sustainable development goals” that just make sense. What these are and how you can contribute to 16 of the 17 SDGs here.

Knowledge is power! Share this article with your friends 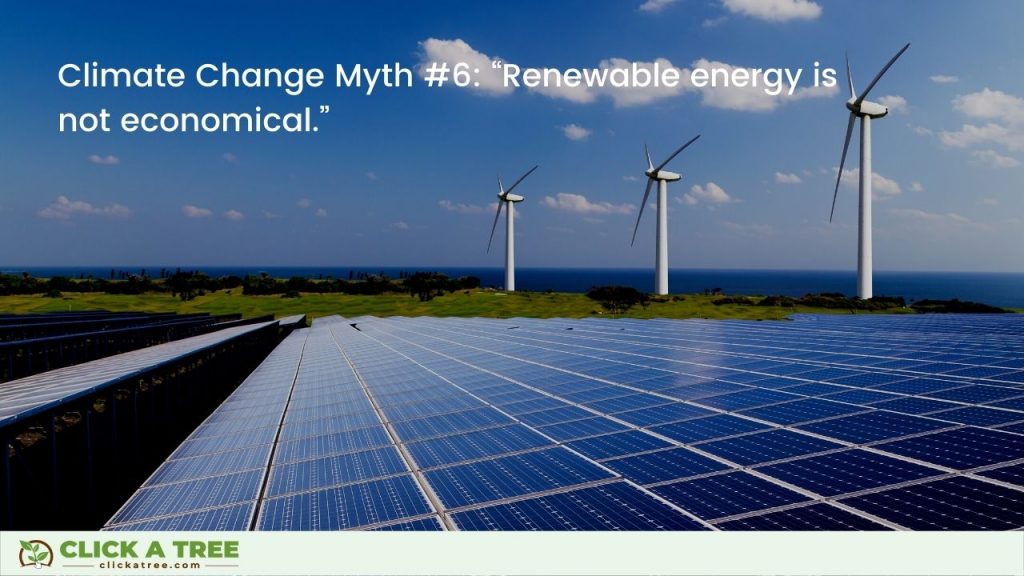 Contrary to popular belief, solar energy is cheaper than any fossil fuel alternatives. In the past, consumers and businesses looked at renewables as a money-making scheme set out to ruin their fast production playgrounds.

The modern-day reflects renewables as a cost-effective way to mitigate fossil fuel output while doing our planet and pockets a favor. For example, one kilowatt of electricity via fossil fuels costs an average of 12 cents, while one powered by solar costs 4 cents.

Efficiency meets Environment. Have a business yourself? Check out Click A Tree’s hacks to cut cost while building a sustainable business.

Climate Change Myth #7: “Animals can adapt to climate change, just like us.” 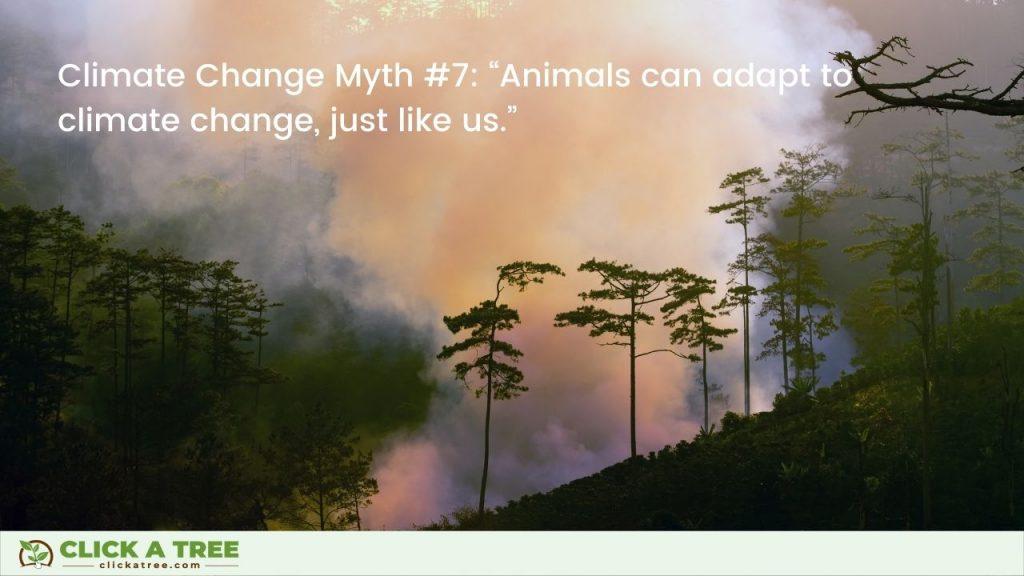 False. Have you seen the Polar bears lately? Arctic dwellers suffer more than the rest as they watch layers of their habitat melting at an alarming rate.

Currently, the Arctic’s natural season is expedited; the ice melts earlier and forms later each year. Being an Arctic mama comes with some drama now, with heightened stress coming from competition for land to raise young, hunt food, etc.

In the warmer climates, the effect still hits hard as mammals are forced to adapt or relocate amongst loss of habitat and human intrusions.

More animals have been spotted in populated areas due to being forced out of their natural habitats. If you’re curious about habitat creation, and what you can do to help, check out our “Planting Trees in Thailand” article!

Want to help us create habitat for endangered animals? Plant a tree today.

Climate Change Myth #8: “The sky is blue. Where are all the greenhouse gasses and smog?” 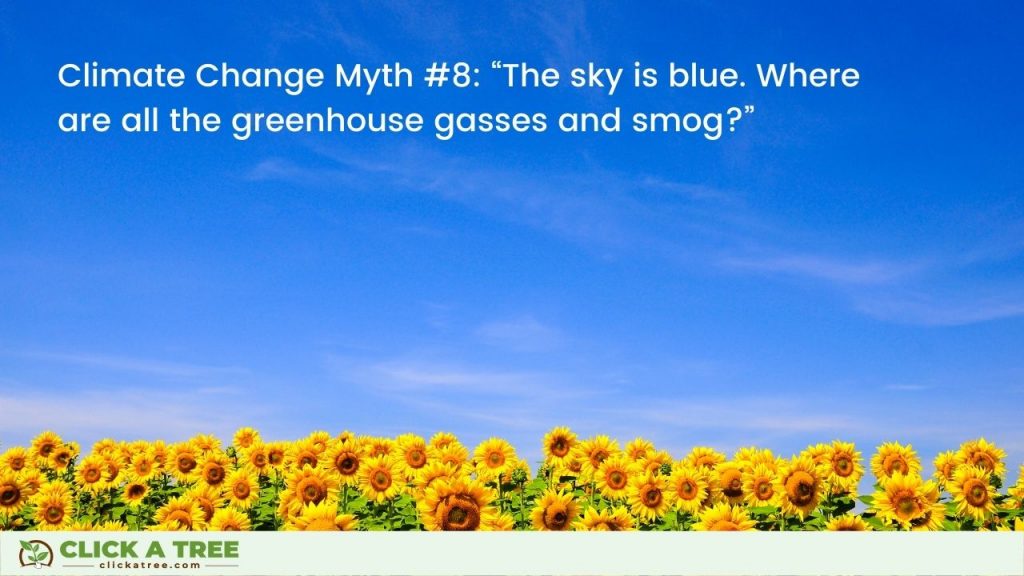 Channel your inner Bill Nye the Science Guy on this one, because we are about to get technical.

Your eyes are working against you with this phenomenon, referred to as “Raleigh Scattering.” Our eyes pick up violet and blue light more easily than we capture red light. As light passes through air and space, it interferes with particles around it such as gasses, dust, and water by being absorbed or reflecting.

Gas is so small that it reflects the light and bounces it off surrounding particles, causing the entire sky to look blue. If you went to space, you would see the colors fading slowly into a pale color once the reds from the Sun contraindicate the blues. Ah, science!

Climate Change Myth #9: “Climate change will destroy the world by 2030.” 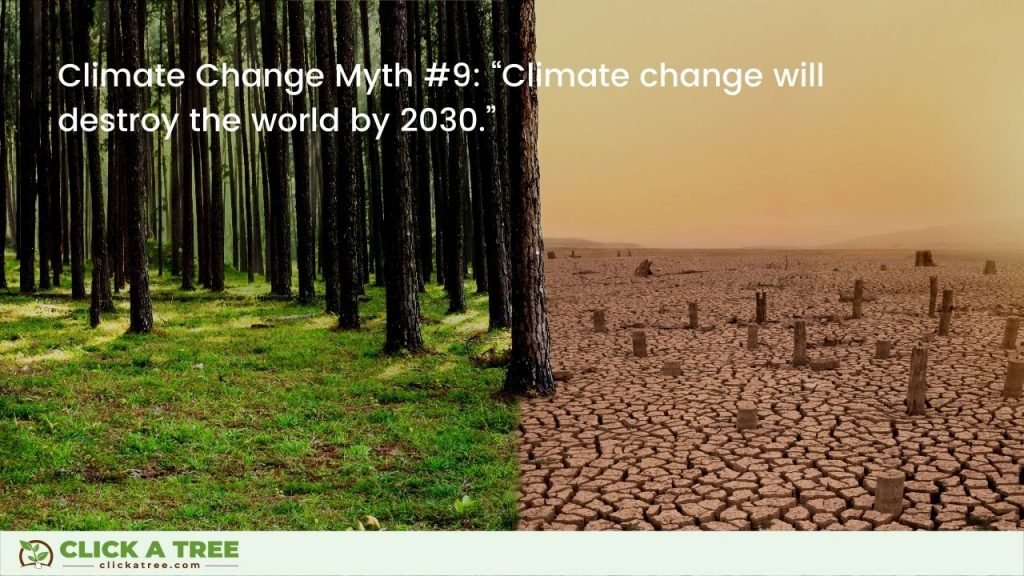 This is a wrongly misconstrued quote that was released by the 2018 IPCC report. The actual quote is recited as:

“The report finds that limiting global warming to 1.5°C would require ‘rapid and far-reaching’ transitions in land, energy, industry, buildings, transport, and cities. Global net human-caused emissions of carbon dioxide (CO2) would need to fall by about 45 percent from 2010 levels by 2030, reaching ‘net zero’ around 2050.”

Hence, it was more of a call to action than impending doom. While there is still no doubt that we need to severely reduce our carbon outputs or be dealt with a stark temperature increase (potentially threatening sea-level cities), we won’t be dying anytime soon.

Play your part in change with countless environmental initiatives, such as Click A Tree’s tree planting missions, or reducing your environmental footprint.

Climate Change Myth #10: “It’s too late to solve this problem!” 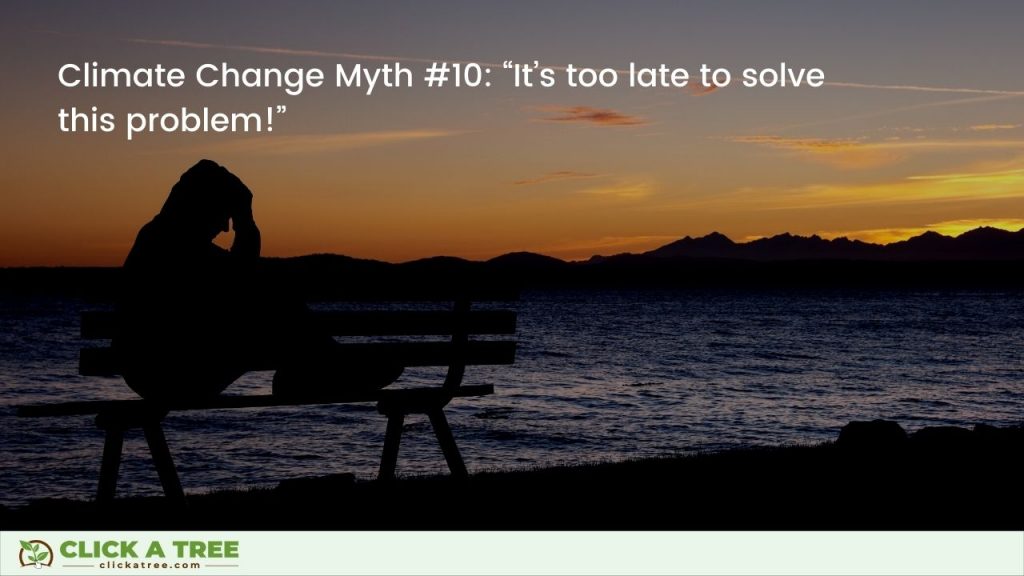 The best myth on this list to bust- it’s NEVER too late. We have had the technology to reduce our carbon emissions to zero for a few years now, but big businesses, governments, energy companies, and bulk consumers need to make the switch. The goal for 2050 net-zero emissions is very attainable.

As a consumer, you can control the small choices you make to green up the world around you and play an important role in setting an example by your buying habits, voice, and daily decisions.

The Climate is Changing, Are You?

We are on board with the green, zero-emission goal, planting trees and growing our education resources along the way. There is no time like now to debunk the myths, and set the planet in green motion.

Enjoyed this article and want to stay connected? Find us on Social Media: