The Twentrees: The Decade That Saves Our Planet

11,000 scientist have declared that, without immediate changes to halt climate change, we will face “untold human suffering.”

What on Earth went wrong? How does the world’s future depend on us? What’s going to happen if we don’t do anything about it? And what can you do about it?

Keep on reading to learn about the Twentrees: the decade that will save our planet. When 11,000 scientists all agree on one matter, it’s hard to disagree. It’ll be like denying gravity or claiming Earth is flat. Yes, you can do it. But you must consider the potential option that you could be wrong.

Now, 11,000 scientists have analyzed the last 40 years of data and “clearly and unequivocally [declared] that planet Earth is facing a climate emergency.” Hence we must consider the potential option that they could be right.

We have to act. We have to turn the 20s into “The Twentrees” – and make it the decade that saves our planet.

We’re lucky enough to share the planet with millions of other incredible, mesmerizing animal species.

Their world is in danger too.

We’ve known for years that a growing number of animals face extinction. That our beloved elephants may not live to see even 2030. Even the largest land animal of them all depends on trees.

But did you know that fish and crustaceans also depend on trees? So much so that without mangrove trees, some marine species will quickly become extinct.

If trees disappear, then animals will too: they rely on them for habitat and for food.

Many of us are yet to realize just how close we are to becoming endangered ourselves. 2020 is the year that represents the world’s final opportunity to tackle climate change and to protect nature.

So the world’s future is in our hands – but it’s not all doom and gloom. There is hope. While the prospect of having to save our planet may feel overwhelming, it may actually be an amazing opportunity to be part of something epic, on a global scale.

In the next 10 crucial years, we can make a difference. We can take steps to protect humans from extinction.

We can save our planet.

WWF Deutschland makes that clear in their video below. Don’t worry – the audio is in English, while the subtitles are in German.

What We Know About Climate Change

The climate change emergency is complicated because it’s driven by a number of different factors.

An ever-growing population, the burning of fossil fuels, carbon emissions, animal farming, short-lived pollutants, plastic waste… all of these things play a significant role in damaging our planet and contributing to climate change.

The power to actually make significant changes lies predominantly in the hands of national governments. They’ve been creating new laws and slowly bringing change to the world.

The Sustainable Development Goals, developed by the United Nations, are an innovative blueprint of goals to save the planet and improve life for every inhabitant on Earth. Planting trees helps with just about all of them.

But it’s not enough.

While we can all aim to eat less meat, we can’t single-handedly overturn farming policies. While we can use less plastic, we can’t make industrial manufacturers follow suit. That’s on international governments.

Sure, they have targets for 2050, and they promise to combat climate change before then.

But we can’t wait any longer. We need to take matters into our own hands. Now.

What we can do is put our voices behind the movements to fight climate change, and make physical efforts ourselves to reduce the impact on the planet.

So, along with petitioning for our politicians to make green changes, and showing our moral and financial support to businesses taking positive steps, it’s time to focus on what we can do as individuals and the role we ourselves can play in stopping climate change. The Role Of Trees In Climate Change

There are many problems that contribute to climate change, but there are also many solutions.

One thing that can actually reverse the damage that’s already been done to the planet is more significant than all of those solutions.

And that thing is a tree.

As a tree grows, it takes in carbon dioxide from the air through photosynthesis. It stores the carbon as wood and releases oxygen back into the air. We’ve already told you about all of this, along with 9 more awesome things that trees do all the time. Why does this matter?

Well, carbon dioxide is a greenhouse gas, named so because it traps heat. That prevents heat from leaving the atmosphere, and this is why the planet is getting warmer.

Trees are essentially Earth’s filter. They play a fundamental role in keeping carbon emissions in balance. We need more trees and fast.

But frustratingly, we’re losing massive quantities of trees each day. Deforestation for the purposes of agriculture, town expansion, or for profit, are clearing as much as 150 acres per minute.

This is devastating for humankind – but it’s even worse for life on land and underwater. No trees mean no wonderful animals to share the planet with.

What we do in the next 10 years could make or break our planet. As a new decade has begun, let’s herald in the dawn of ‘The Twentrees’ – the decade that will save our planet.

Related Article: Organizations that plant trees: 6 ways to identify the best ones.

What Will It Take To Save Our Planet?

How Many Trees Could We Plant In The Twentrees? A recent report by ETH Zurich quantified the number of trees we could possibly plant, and what effect this could have on the planet.

It found that, excluding the areas currently being used for agriculture and human life, there are 0.9 billion hectares of the planet suitable for afforestation (the planting of forests).

That’s approximately the size of the entire United States of America!

If the Twentrees made this become a reality, the mature trees would absorb 205 billion tons of carbon from the Earth’s atmosphere. That’s a little over two-thirds of all emissions that humans have created since the dawn of the Industrial Revolution.

Well, critically, it will take decades for all these newly planted trees to be established. That’s why it’s so important that these efforts start sooner rather than later.

And that’s where you come in. Planting trees with Click A Tree can help plant all these badly-needed trees. Even if you only plant one, let’s get started planting trees today. How Many Work Days Does That Create?

If you live in any of these countries, you have a great opportunity to get involved in local projects that help to re-establish plant life.

It’s generally accepted that, depending on the tree species, you can plant anywhere between 1,000 to 3,000 trees per hectare.

And, in one workday, one person can plant roughly 100 trees. Let’s assume there are 250 workdays in any given year. Over the Twentrees, one person will plant around 250,000 trees in roughly 2,500 workdays.

So, we’ll be conservative in our calculations. The Twentrees lasts for 10 years, and if we’re able to plant 1,000 trees per hectare across 0.9 billion hectares, this means that 900 billion trees would be planted in total.

That means that the Twentrees will create 3.6 million jobs. That’s an astonishing 9 billion workdays!

Planting trees for the Twentrees would be life-changing for 3.6 million people and their families. They would have a stable, reliable income. This would help them afford food, resources, and even education.

How Can You Help Plant All Those Trees?

Planting trees is something that all of us, all over the world, need to get passionately involved in. We can’t just leave it to all the people actively involved with planting trees on their workday.

The Twentrees are our responsibility too.

While world leaders argue over which countries we should be reforesting, how many trees should be planted, and which tree species should be used for biodiversity, the rest of us can act.

Plant some trees in your own garden, join local projects to replant parks and nature reserves, and support organizations that run afforestation projects.

Did we mention organizations that run afforestation projects? That’ll be us then!

At Click A Tree, our mission is to make sustainability simple. And it doesn’t get any easier than a few simple clicks from the comfort of your seat.

Plant a tree for marine wildlife, for endangered elephants, or for young adults in Ghana to build a better future for themselves.

Use B’n’Tree to tell the world about the benefits of planting trees as well. Book your weekend travel, your annual vacation and your business trips via B’n’Tree. We plant one tree for every booking – at no cost to you.

Read the B’n’Tree Green Guide to learn more sustainability hacks that you can use in everyday life. That helps save the planet, and helps save you money. 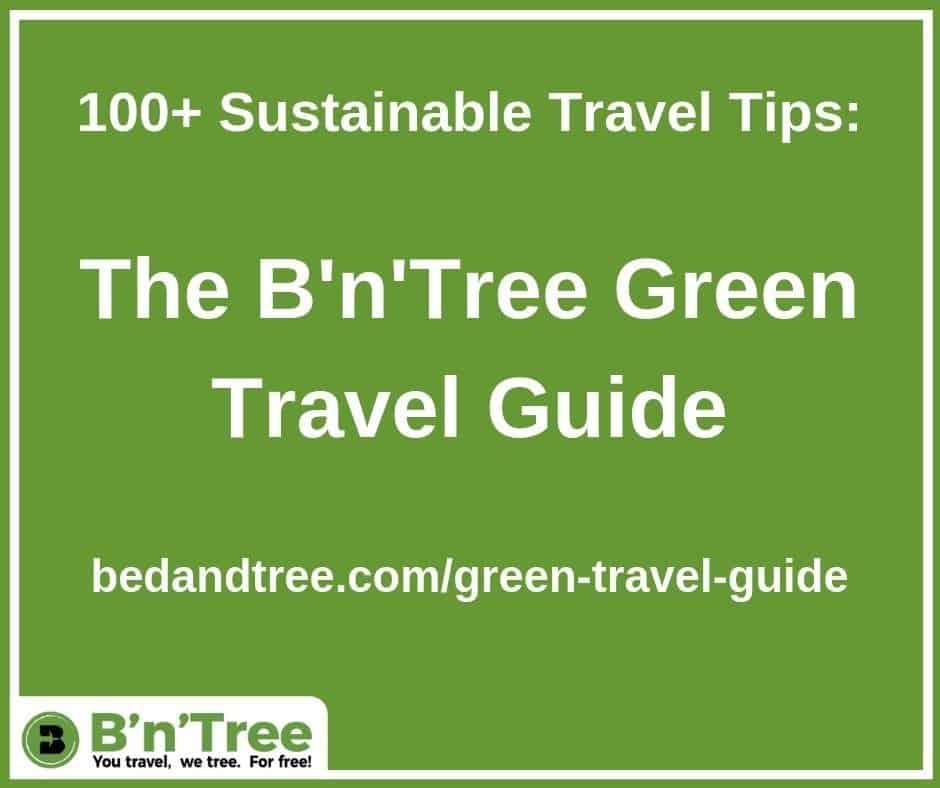 Together, we can begin the work of replanting the planet.

The Twentrees Are Here: It’s Time For Us To Act

Planting trees has the power to save our planet, but it isn’t just about the long game. Trees process carbon dioxide at the highest levels during periods of growth, so in theory, a 50-year-old tree can be making just as much of a dent on climate change as a 150-year-old tree.

A tree you plant today will get to work removing carbon from the atmosphere immediately, making the air cleaner in your garden, neighborhood, and ultimately the world in general.

The only future is a green future, and if enough of us act, the next decade can be the one that saves our planet.

We can be the generation that changes our world for the better.

We’ll be the ones sitting in nursing homes, telling our grandchildren: “The Twentrees: it was a tough decade, but we made it.” Your Time To Act

What will you do to make The Twentrees the decade that saves our planet?

And most important of all, plant a tree today.

If you know any companies that would benefit from planting trees for their customers, then make sure they get in touch with Click A Tree.

Spread the word. Save the planet. And don’t leave without signing up for our monthly newsletter – GROW. We’ll plant a tree, for free, just to say thanks for joining our community.

With your help, we will save the planet. The Twentrees will be a tough decade, but we will make it.

Want to know more about trees? Check out these 15 amazing and unbelievable facts!